Since the Wunderground API may be going away or a new API will be issued to current PWS owners with an existing API, I was thinking about moving away from Wunderground to avoid loss of data linking with Wunderground. Currently, my Wunderground account reports temperature and solar radiation to my PVOutput account. The ambientweather.net website has the capability to generate an API and since it is directly linked to my PWS which is an Ambient Weather station. Could I substitute this API for the Wunderground API under the “Edit System” page or is PVOutput specifically linked to Wunderground?

G’Day. I’ve had a Wunderground API since I joined PVOutput in December 2015, and my temp and solar radiation are still being sent to PVO. My paid membership expires in February next year.
Funny story about WU - When I first paid for a membership back around 2010, I kept having their ads showing up on my iPad, so I’d send them the screenshot showing I was logged in, but the ads still showed. The first time, they apologised and extended my membership a year. Good!
Somehow, over a several similar instances, my membership ended up extended until 2020. I’ve only paid once, and I’m sure it was less than $10 back then.
Don’t know if I’ll pay the $10 next year or look elsewhere.

Could I substitute this API for the Wunderground API under the “Edit System” page or is PVOutput specifically linked to Wunderground?

There are no plans in the short/medium term to support new providers unless there is more demand.

I think demand will rise once the Wunderground API actually stops working.
I think a lot of people (like me) are using the API to pull in temperature.
But for me the API is still working atm, but IBM has ‘promised’ us it will stop working.
I guess they are disabling free API in batches, being careful to not upset the paying customers.

For Aus, could you grab the 5 minute station data from BOM, then instead of just plotting the daily range, have an option to plot that common data on peoples graphs using the closest weather station setting that already exists?

Please add my vote for a new api site

@gregvet - Can you generate a throw away ambientweather api key and email it to pvoutput@gmail.com please.

Hi Bankstownbloke, I have sent the following correspondence to the Ambient Weather Founder/CEO:
“Hi Mr. Edelman, I have been asked by the developer of PVOutput to generate a test API key to see if it is compatible with PVOutput. If I do generate a test API key, will I lose the ability to generate a different API for my own personal use? Thank you for that consideration.”
I will let you know the response ASAP.

here is the Ambient Weather Network API Facebook page if it will help you:

I’ll send you both a user key and developer key to the e-mail address.
"I am not sure what he is asking for, but there is a User Key and App or Developer Key.

You can generate both, and as many as you want, here:"

Generate the keys by logging in and going to -

Valid keys will display some text data in a new window - 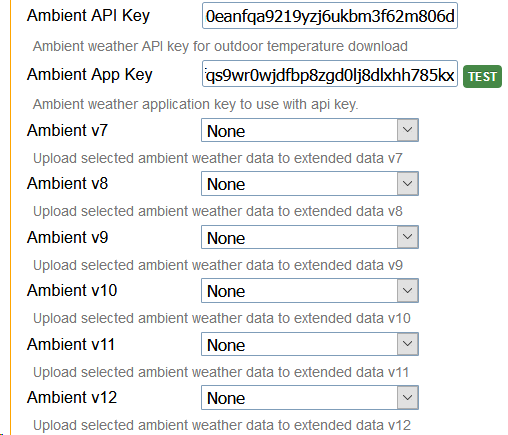 Do you need to make an account to log on?
If so it asks for the mac addy of your weather unit which I dont have.

I tried without an account and got an api key and an app key. by pressing associated button at bottom of page.
After testing new page comes up saying {“error”:“applicationKey-invalid”}
Tried with new keys 4 times

If I need an account is there a list of weather station Mac addys for different locationss?

@ kemyers95963 do you need your own weather station to do that? If how did you get around the mac addy bit?

Well Ambient does offer some low cost stations with just a simple outdoor thermometer. You don’t have to get the stations with the complete monitoring array. Looks like a $75 unit would be the cheapest that has connectivity and reporting to ambientweather.net. So that one would have a MAC address since it has Internet connectivity.

https://www.ambientweather.com/amws2800.html
Found this for $29 (US) How do know if they are able to be read by PVOutput?
Thanks Baz

That looks to be the cheapest solution to get a Ambient API key.

Currently only available in the US.
Will search around more for Oz.

Will search around more for Oz.

Support for openweathermap.org which does not require a personal weather station is in progress -

OpenWeatherMap or any other free solution please In Progress

The Ambientweather.net is a solution to people that have their own weather station - the very minority here. Is there any solution for the majority of us that dont have their own weather station? OpenWeatherMap has a free API key that can be used by anyone. Can PvOutput check if it can implement the ability to connect to OpenWeatherMap.net or any other free service? Tx