We have just opened an account [Id antdn] our initial installation was a 5.75 kW system with 23 x 250W panels with Enphase MicroInverters. We have just upgraded our system by adding another 7 x 320W panels taking the system size to 7.99 kW so we now have a mix of panels which cannot be configured based on the input variables supported by the PVOutput system. In Australia many of the Energy Distributors have changed policy in relation to the maximum kW PV + Storage [based on Inverter capacity] size a system can be connected to the grid. It has been increase from 5 to 10kw per phase with a 5kW cap on Feed in [power exported to the grid]. My guess is that this will generate upgrade activity given that the ROI for PV that generates a billing credit offset [Export to Import ratio in our case approximately 4 -1 kWh] when compared to Storage is more cost effective. This may be good enough reason update the system to accommodate upgrades. I also noted that the system does not support panels in different combinations of orientation like NW NE etc.

Edit the system and add a secondary array - 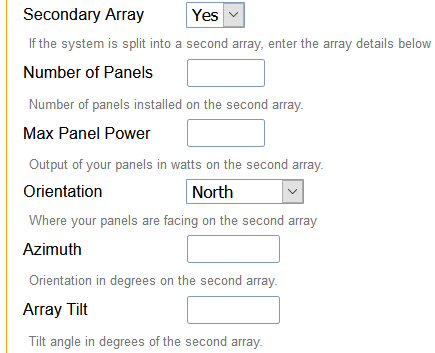 I have three individual arrays SW NW and NE that support 23 x 250w panels and 7 x 320w panels 30 in Total spread across the three arrays.

I’ve also just upgraded my system with 6 additional panels and I think my question is similar to the OP except I have two arrays not three.

So basically I want to change the 12 north panels to 18 in PVO but just want to make sure that this change won’t destroy my data that’s already in PVO. Can this be done?

edit: I’m already using the secondary array in PVO for the 6 west panels.

So basically I want to change the 12 north panels to 18 in PVO but just want to make sure that this change won’t destroy my data that’s already in PVO. Can this be done?

The panel and orientation data is for information only, it doesn’t affect the data recording.