Production indicated well after sunset on some systems

I monitor several systems in my area for comparison of production. I have noticed that all the Enphase systems are showing a small amount of production after sunset from 15 to 40 watts. All of the SolarEdge inverters show 0 watts. Does anyone know why that is? Examining the outputs of these systems the value reported in the Live Outputs for the Enphase systems only the values shown are the last values reported before production stops. So why is that value still being reported in the Live Outputs?

I know the problem you are seeing. My ‘old’ 7.2kW, 3 phase system at Prestons used to show all sorts of (often) random reading during the night. I thought it was an oddity of the ABB TRIO-8.5 inverter.
I used the Rule:
if (out && power <100) power=0;
to have the system record zero if the solar output showed less than 100. My system recorded outputs of up to 90kW over night, so I used a buffer. 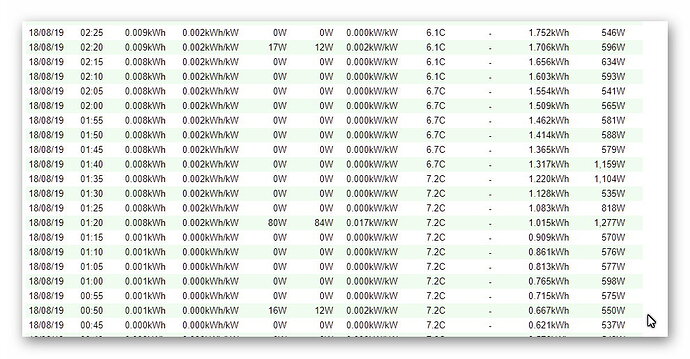 Ashampoo_Snap_22 August 2021_11h08m22s_001_991×517 151 KB
I moved to a retirement community almost two years ago and installed a single phase system with a 5kW Goodwee inverter.
To my surprise, the ‘new’ system also recorded outputs at night, so I added the Rule back into the PVO system. 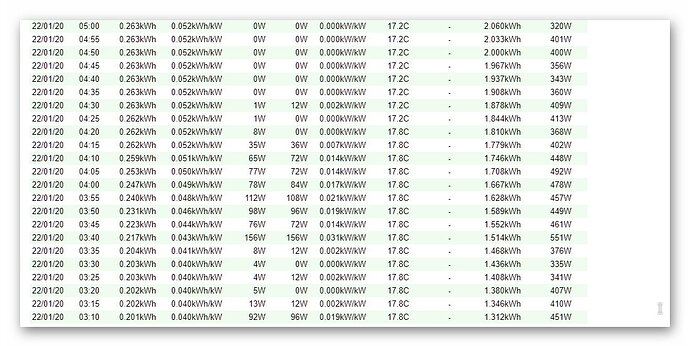 Ashampoo_Snap_22 August 2021_11h33m18s_002_1096×551 164 KB
I think the problem is likely something strange my Smappee is doing. It is the common link!
BUT…
Back in the day (90s and early 2000s) I did quite a bit of work with/for Clive at Windpower Australia. We discussed a couple of times his customers with off grid solar systems reporting that their meters showed ‘output’ at night. We knew there was no output, and he convinced his customers, but we were baffled by the meter readings - obviously the coils in moving-coil meters won’t move without a current flowing.
Somehow, somewhere some current is being generated, very likely induced somewhere in the wiring, otherwise no meter movement!
A full and proper technical explanation is above my competence level, but it still gives me food for thought during this long lockdown phase we are having at the moment, and I think of circulating currents in electric motors and paralled generators…
lennybig August 22, 2021, 9:44pm #3

@bigharps I see what you are saying, and have noticed some of late night reading anomalies as I also have an Enphase system. I think what @lwsmiser is referring to is specific to the “Live Outputs” link.

I can tell he snipped the image at the top on 8/19 (at 10:45pm local time). Looking at the example system “mWr” that he included, it shows the system was last seen at 10:40pm, with a power reading of 19W. Looking at that actual system at the snip time, it had been reading 0W for a couple of hours (with no irregularities). But the last power reading at 7:35pm was 19W, which is what PVOutput continued to show in the Live Output (probably until midnight). The same was true for systems “Orange” at 13W and and “Schaffer” at 43W.

I’m going to play around with my system for the next couple of days, see if mine does that same thing, and see if the rule “if (out && power <100) power=0;” eliminates the power reading error.

Just wondering if this glitch only affects systems that also record consumption (as all the Enphase systems above do). 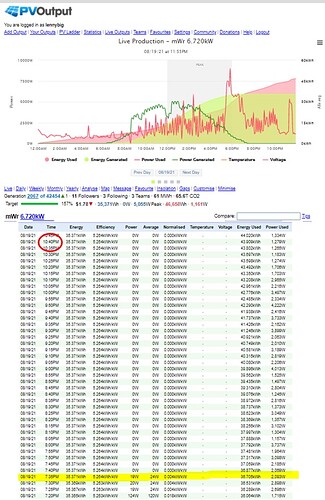 I suppose you realise this, but change the ‘100’ to suit your situation. Maybe 20 is good enough to cancel your night time readings.

The above system stopped reporting generation at 7:25PM with 34W. The live page fills the ‘empty data’ with 0W after 7:25PM for the consumption records.

This behaviour is dependent on inverter / software etc, some will continue to report 0W after sundown in which case this is shown on the the Live Output page.

Pulled screen prints from Live Outputs for the last 5-days with my Enphase system.

First day was with no rule, the next 4-days were with the rule under Automatic Uploads for Direction: Solar if (out && power <100) power=0; After the first 2-days, I adjusted down the “100” watts to 30, then finally 10 for today. With the rule enabled, the Enphase erroneous production numbers after sunset stop.

The other 2 systems, Bigger Home 2 (my son), and Barton Home (my Nephew) who both have newer Enphase w/ Enlighten systems and no rule show after dark production on most days. My system has never been as “off” as some others, usually only showing consistently 1 or 2 watts of production after dark in Live Outputs. Some other systems show quite a bit more.

Seems to appear that when the micro inverters lose power, Enlighten just stops reporting (production) instead of reporting “0” watts. Consumption continues to report as normal. 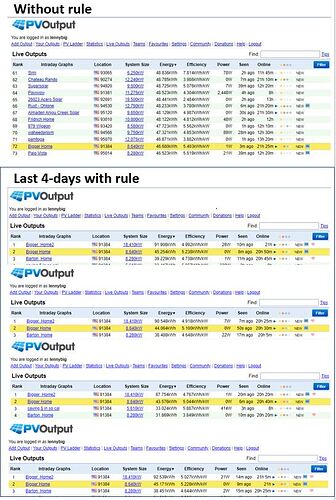