I love looking at the graphs and I particularly like the idea of having the separate strings in extended data.
So in my main site, I’ve got V7-V9 set up to be String 1, 2 and 3 respectively.
I’ve also been logging efficiency as V10 (rudimentary Power out divided by Power in).

I realised at this point that I also wanted to capture string voltage and amps, so I created 3 new sites to capture this extra information.
I think it’s been going well so far, I love that I can see the insolation per string.

I have 2 questions at this point:

I was also thinking about dedicating V12 to insolation estimated actuals from Solcast but wasn’t sure whether the insolation data is already from there or not.

would the insolation be accurate for each string, given that each string is set up with a separate site and facing?

Should be fine as long as the azimuth, tilt, location, size is accurate for the individual string.

Thanks BB, and thank you for this wonderful site!

is it strange that the early morning and evening for inverter efficiency seems to be >100%?
This also happens during cloudy days.

Is the data you are using comparable as a ratio?

I don’t known much about the data from such inverters. but e.g. is it possible the power out is an average for the interval while the DC in values are snapshots for a single moment in time?

No idea to be honest.
I’m actually thinking the efficiency might not be accurate as a spot calculation but instead calculated over the course of a day/month/year.
Perhaps due to the reasons you stated.
Maybe capacitors are slowly discharging towards the end of the day or something?

Hi @avarical, I am not sure of are aware, but you can save a bit of screen realestate and reduce clutter by limiting the number of digits presented AFTER the decimal point. 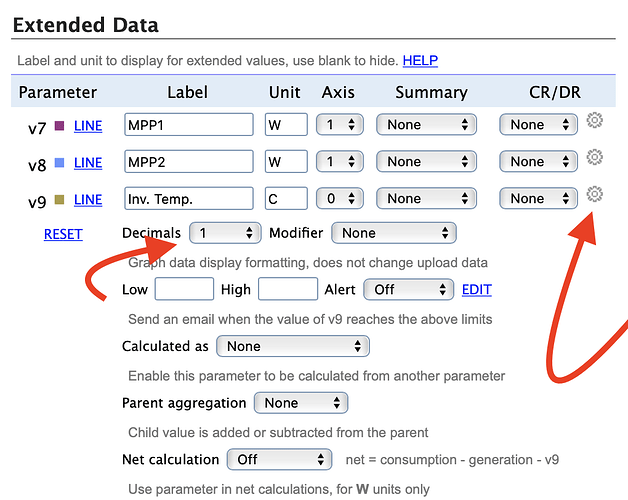 It’s unlikely that you’ll have many values with an accuracy of 2 or more digits to the right of the decimal point.

Thanks Grannos, great idea! Thanks!