Power one inverters and their site include the production of the last 365 days.
To me this seems handy and I propose the implementation of such a feature in the daily view at the prorata target line.

And the Yearly Production view doesn’t provide the information you need?

Well, in a way yearly production or monthly provide the information but last 365 is an easy and quick way to check your system based on just one number. For me this seems handy.

I think a daily rolling plot of the last 365 days of production, consumption, import and export is a useful indicator or longer term trends.

That would be fairly useless in my use case. Far too much variability from season to season and year to year because of weather and insolation reduction from forest fire smokiness for months.

That would be fairly useless in my use case.

Which doesn’t mean it’s useless for everyone else.

Here’s a sample plot of a rolling 365 average of daily PV output, updated daily. Each point is the average daily production for the previous 365 days. 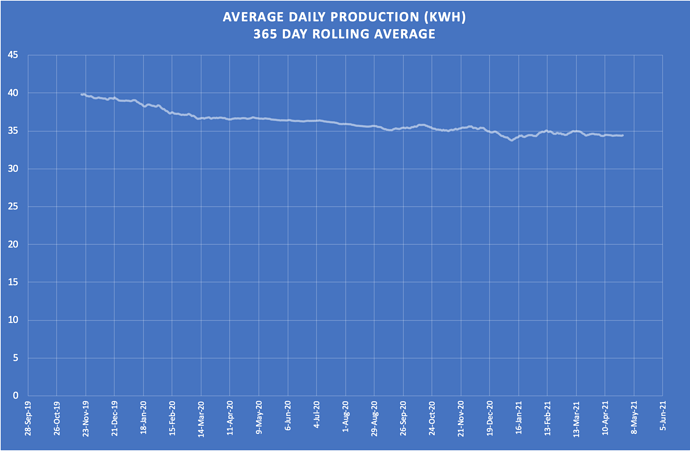 We can see that over time the average annual output of my system has been declining. That’s in part due to:

Now it’s not a simple thing to parse out the individual impact of such variable influences, but as a long term trend it’s a useful indicator.