Is there a way to model different tariffs?

looks like PGE is going to get rid of EV-A and replace it with some other tariff that really punishes solar customers (peak from 4-9pm, very short partial-peak in the afternoon.)

is it possible to model the money side of things under one of these new tariffs without making any changes to the database? i got the impression the last time i looked at this that if you change tariffs, you need to perform some kind of recalculation when then ends up changing the $$ amounts in the database. 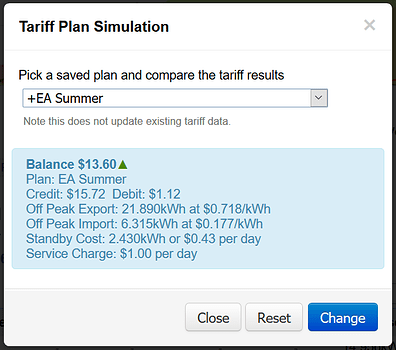 There are plans to extended this functionality over multiple days.

it would be great to be able to compare a week, month , qtr or year of this. when you are nearing contract expiry.

This is related to the following idea -

Hi BB, could we please have the Plan comparison function made available across weeks and months, rather than just 1 day at a time? As part of this, it would be nice to allow a side by side comparison of 2 plans across say a 6 or even 12 month period (assuming one has the data available). This would allow us to easily make valid comparisons of power plans (eg Flat vs Partial TOU vs Full TOU) using a realistic set of data - comparing 1 day at a time is statistically invalid to say the least.

I have a spreadsheet that does that for me now, it’s needlessly complicated and can take a while to calculate given it’s hundreds of thousands of lines of data over a few years.

It’s dirty and includes plenty of odd calculation specific to me, something I should clean up and share one day. It does allow multiple tarrifs for both import and feed in with full time of use (by hours) for both (and daily rate of course).
It also has the ability to calculate the savings compared to what you would have paid without solar.

Hawk,
Do you have a way to download your information from pvoutput without the text part of the fields. Something that would load into excel?
If I could get my old data I would calculate the tarif both ways and show the difference as well.
I have the same problem with SMUD. The TOU 4-7 pays 28 cents/ kw but the new TOD 5-8 pays 19 cents. Off peak has been extended for the winter to include all the time except the 5-8pm on weekdays. Winter off peak is 9.69 cents/ kWh peak is 13.38 but in the winter time there is very little solar generation from 5pm to 8pm. Summer rates are a little higher off peak time is midnight till noon and allday on weekends and holidays. The rate is 11.66 cents, Midpeak is from 16.11 cents noon to midnight except for the 5 to 8pm 28.35 cents. My system generates 10 % of its daily energy in june in that time frame but 20% from 4 to 7PM which tracks the corresponding peak time on my current rate 37.04 cents.
My current rate.
9 pm to 9AM and weekends/holidays 8.53 cents
mid peak (9AM-9PM / M-F) 14.81 cents
Peak (4PM-7PM / M-F) 37.04 cents.
(I changed the name to match the new rate names.)
As you can see the rates are now much lower for the times that I can generate energy. And they have moved the expensive energy an hour later where production will be low.
It is hard to justify a system when you can buy energy for less than 10 cents. With the new rate structure it is hard to generate energy for the peak period. I typically use more than I generate in the 5 to 8PM time slot where I generate a lot more than I use in the 4 to 7 time slot.

Anyway I would like to run a comparison with my own data to see if the new rate is as bad for solar as I think it is.
I purchased a new to me home in April and was thinking about adding solar to it but it looks like the new rate structure will kill this idea. I am still looking into it but it does not look good for solar at this point.
We have not moved in yet, doing some upgrades first. Will not have very much energy history to gauge whether solar is needed for this home.

John01,
I have been operating my PV system for three and a half years. To date I have not had to pay SDG&E anything. My system was designed to supply 100% of my power throughout the year. The first full year of operation netted me about $83 because I owed $123 for a partial month of electric. The following two years netted me about $180 per year. All my costs were paid using the NEM credits for excess production. The NET excess generation can be converted into cash at the end of the true-up period. Each month I am charged for energy I consumed which I did not generate myself. It is an in kind compensation and my excess generation is always ahead of my consumption during the time I don’t produce any power. Since I was on the DR three tiered rate I am allowed to continue on that tariff schedule for 4 years after start up of my PV system. I will then transition to the TOU tariff. My system produces over 200% of my annual consumption.
However, if you design a system to only supply 50% of your annual consumption you will indeed be paying out of pocket for the other 50%. There are things you can do to alleviate the cost of energy at the highest rates such as:
Run you energy hungry appliances at YOUR peak production times, change out your old Fluorescents and incandescents with LEDs. This is more than you might efficient than you might think since lighting is as much as 80% of you bill. I cut my consumption by this method alone by 25%. My daily consumption is now 12 to 17 kWhs per day depending on time of year. While my previous average consumption was over 20 kWh per day over a whole year. Of the power I use daily 50% comes from solar and 50% from the grid. If you use electric water heaters you can use IFTTT devices to heat water only during the peak hours of PV production. Alternatively you can convert to gas water heaters.
There is more to solar than comparing TOU rates but you need a system designed to produce enough power to make it truly economical. My system plus my other efforts at reducing consumption has saved me over $7000 in electric costs so far.

well you might suddenly find you start to owe if they radically change the rates, as PGE are apparently preparing to do. hence my question.

And as SMUD has done.
There are a lot of things that go into reducing energy costs but the OP was looking at rates and that is what I am concerned about as well. If I could take my current rates with me to the new house I would install an 8kW DC system. With the new rate system where the expensive (read high credit) rates are moved to low solar production times.
In CA we get retail credit for the overproduction but to turn it into cash we get replacement cost with is wholesale rate. PG&E quoted me 3 cents while I was working on a design for a friend. I do not see how you can build a system with the idea you are making money at 3 cents.

Our parts have to be approved which make the cheep chinese part off limits. Approved parts typically cost twice what cheep parts cost. 60 to 80 cents per DC watt are good prices for 340 watt panels. Inverters will run 25 cents / watt and racking is an other 20 cents. If you can work for free your system cost will probably be $1000+ the commodity parts.

As I said before the winter rate is 9.65 except for 3 hours each week day, when the sun does not shine. I do not see a reasonable return on investment with the new rates. I would like to be able to plug the new rates in and run them with the history I have on this system and see how much difference there is. I could be wrong and wish that I installed solar at the new house.

Hi, are there plans to finish this improvement (simulation of tariff for monthly and/or yearly data)? This would be awesome!

are there plans to finish this improvement

It is still planned and still investigating the best way to do this without impacting on performance.

I can’t get my ‘Edit Tariffs’ to work. When I click on it, it just goes to a blank/hung page.

When I click on it, it just goes to a blank/hung page.

Where are you clicking the link from?

Settings
Click Edit at the bottom next to my Registered System
Scroll down to Additional Settings and click on Edit Tariffs button
It goes to a blank page with “https://pvoutput.org/edittariff.jsp?sid=70236” in the address bar (70236 is my system id)

I have tried Chrome and IE 11. I just get nothing. My system was enabled 48 days ago when I added it to PVOutput. I was able to edit the Tariffs page the first couple of days. I tried to go edit them around day 15 and haven’t been able to.

It goes to a blank page with “https://pvoutput.org/edittariff.jsp?sid=70236”

Thanks for this, the issue has been fixed now.

It was caused by a blank billing cycle name - it should be defaulted to ‘Period 2’ after saving if still left blank.