I am sure this has been asked but search does not reveal the answer. How is “energy exported” calculated? My interpretation is that it should be daily generation minus daily energy used. My calculations do not come near to the reported value. Since these values (daily energy used and daily energy generation) are on different pages, that must not be the case.

depends if its net or gross.
also note depending how you grabbing your consumption data (feed in point or consumption point) you may actually be using some of the power generated but it may not be being recorded 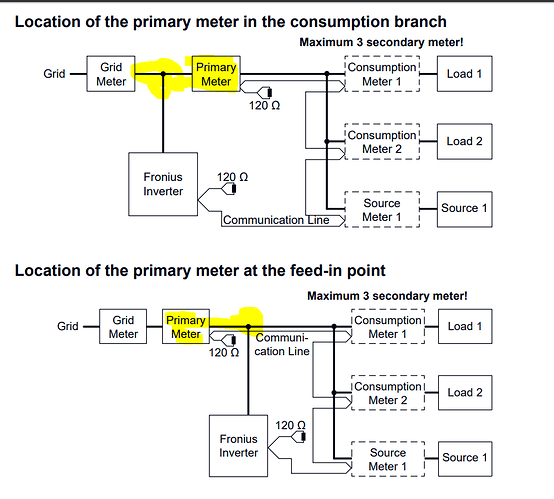 Thanks for the reply. My daily generation(sensors immediately after the inverters before electric panel) is accurate as well as energy used(sum of all use sensors). The difference I calculate is vastly different than the reported value.

How is “energy exported” calculated?

The simple answer is that the PV inverter outputs power at a voltage slightly above the voltage of the grid and electrical energy flows from higher voltage toward lower voltages. For AC energy the value is always positive for any portion of the cycle except when it is 0 when the voltage reaches 0 in each cycle. In calculations root mean square or RMS voltages and currents are used. In AC circuits the useful energy is calculated using the ac rms Volts and the ac rms amperes and the Power factor which is the Cos of the current and voltage wave forms offset due to reactance in the circuit. Reactive power is not generally considered since it is not substantially consumed when used in capacitors and inductors such as field windings in an ac induction motor.
There are two ways to connect a PV system to the Grid. These connection export less or more energy for the following reasons. They are termed “Supply Side” and “Load Side” here in the USA. The former is connected between the utility meter and the main breaker on your house panel. The latter is connected on the last breakers furtherest from the utility meter. In the case of the Supply Side connection most of the power will be exported before it reaches the most distant breaker and will supply less power to you loads. In the case of the Load Side connection a larger percentage of the power you produce will flow directly flow to your loads and the excess, if any, will be exported to the grid because the output voltage of your inverter is at a slightly higher voltage than the grid. Most electric companies favor the Load Side connection for the obvious reason of less export from each PV system that is connected to the grid. I don’t have any numbers to show how much different the self consumption is for the two connections.
This may be pictured as a reservoir filled from the top at the higher voltage of the grid with power which flows to the loads. The loads are several taps fixed on the side of the reservoir at various levels and allowing power to flow to their lower levels which model the lower voltages of the load circuits. When the sun rises the power produced by the PV panels begins to enter the system. This point at which the power from the PV panels is introduced to the system determines how much of it will flow into the grid or be exported.
The load side connection introduces the PV power at the bottom of the reservoir which replaces the grid supply as it increases until there is more power than the loads require. At that point the voltage has risen above the grid voltage and the excess power begins to be exported to the grid.
The supply side connection introduces all of the PV power at the top of the reservoir and the voltage rises and begins to export power immediately while part of the power from the PV begins to replace the grid power in the load circuits lower down in the reservoir. The difference in the flow of power allows the supply side connection to export more power than the load side connection.
In short the supply side connection is always exporting power while there is production while the load side connection only exports power when the production exceeds the consumption.