Is there a rule I should use in the Primary Device settings? Like when solar production starts add the subtract secondary power from power? 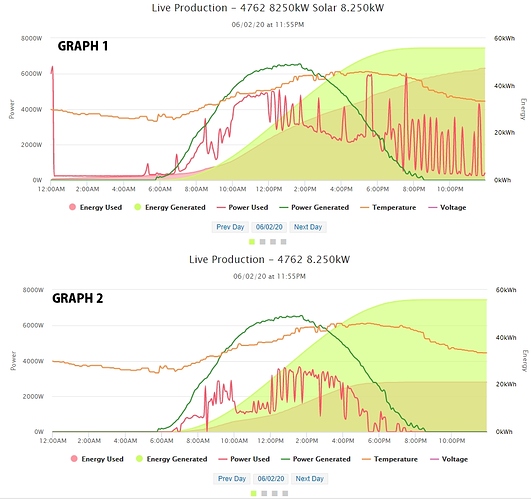 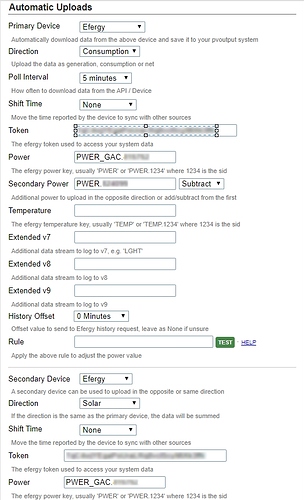 Maybe this shows it better. 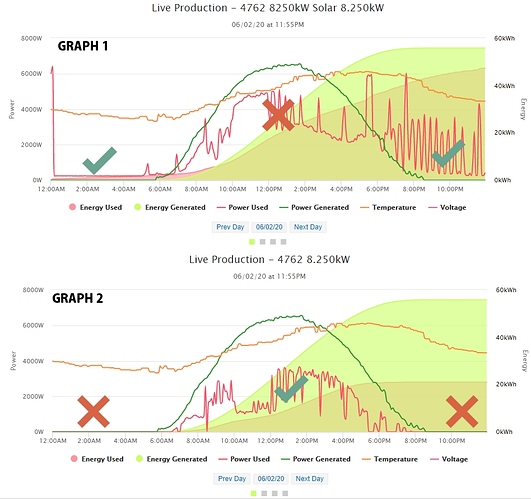 Here are the different settings. 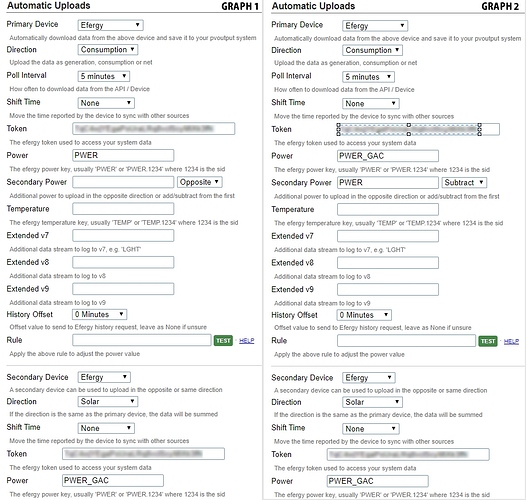 Looks to me like your consumption probe needs to be moved to another wire. Currently (pun almost intended) it seems to be monitoring a wire which is affected by both generation and consumption.

Note the Efergy probe is non-directional - no matter which way the current flows, it measures a positive number. If you had a directional probe, I’m guessing that when the sun is shining your consumption graph would go highly negative. At a guess, your consumption probe is on a supply wire on the grid connection, and its measuring both consumption coming in, and solar feed-in flowing out during the day.

Can you move the consumption clamp to the wire that forms the bus close to the individual circuit-breakers of the house power and lighting circuits?

And - be very careful always behind the meter when playing with these clamps, if you aren’t absolutely sure what you’re doing, get someone who does to help. And don’t do it alone - make sure you have an observer so that if you touch something you shouldn’t, the ambulance can be called in a hurry.

Great advise for being safe! My PWER CT’s are on the main feed coming into the property as you suggested. I have three panels, main panel (1) that feeds the house panel (2) and feeds the the shop panel (3). But on the main panel (1) is also my A/C system. So the only way I can get my total consumption is to have the CT’s on the main feed lines. The problem is absolutely caused by Efergy’s non-directional probes (wish I understood that fact when I bought them). But for some reason when I use the subtract feature in PVOutput my consumption is erased outside of my solar production. My issue is when I subtract PWER_GAC (Solar) from PWER I lose my overnight consumption readings as seen in Graph 2. I would like to have my consumption readings from graph 1 (green check) combined with my consumption readings from graph 2 (green check). I was thinking that maybe a “rule” could make that work. Like only subtract PWER_GAC from PWER only when PWER_GAC is greater then 100 watts.
I’ve tried different rule combinations but nothing seems to work. ¯_(ツ)_/¯

Are you sure there isn’t a wire behind the main panel that has the consumption current for the A/C, house and shop panels, but is ‘after’ the point where the solar is injected? Ideally, you want the clamp to NOT be on the direct path from inverter out to the main grid feed.

My consumption CT’s are absolutely connected to main grid feed. I would need 4 separate CT’s to capture all of my consumption. As shown in my 2 graphs, it is possible to get the correct reading but I would like it to be combined into 1 graph. I’m sure its possible to have PVOutput to not delete my consumption data prior to solar production starting OR creating a rule to subtract Main CT’s from Solar CT’s once Solar is above 80-100 watts. 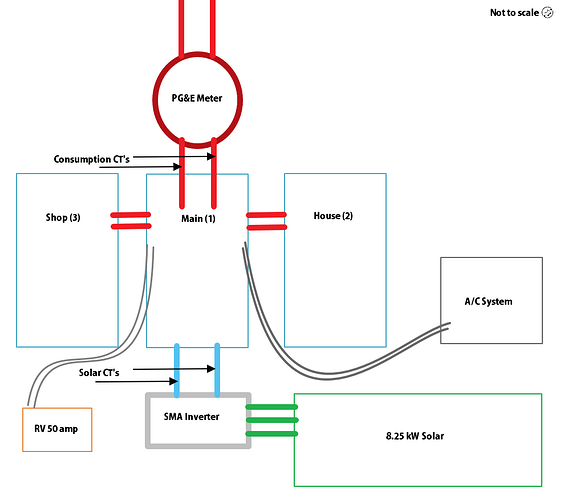