Hi
I am trying to correct the daily energy cost in $ when the battery is either charging or discharging. I have v2 - Gross Solar
v4 - Gross Consumption
If was fine before the battery was added as the net calculation combined the the tariff information correctly calculated the costs. A battery has been added which obviously charges with solar and discharges until it runs out overnight sometime. The grid then supplies the load until the sun comes up the next day. I have added the following in extended data.
v7 - Battery Charge
v8 - Battery Discharge
v9 - Net Export
v10 - Net Consumption
v9 and v10 are calculated with the following rules
v9 = v2 - v7; if((v4 - v8 - v2 - v7) < 0) v10 = 0; else v10 = v4 - v8 - v2 - v7 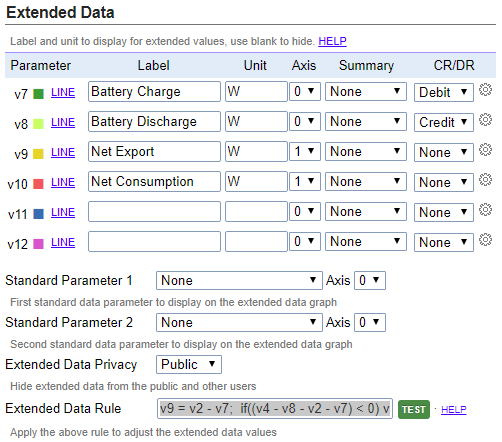 The bit I can’t work out is how do I get the net grid export and import back into the v2 - v4 calculation which determines the daily costs. I have looked at using the CR/DR function but that only provide a single tariff which does not work as I need net. I am thinking it is in the parent / child setup somehow but how do I get v7 deducted from v2 without impacting the v2 graphing, same for v8 and v4?

Does v4 [ Gross Consumption ] include the power that is being directed into the battery? What is producing the v4 figure - where is it being measured?

Would it be better if you used Energy values rather than Power values for determining cost(s)? Any power figures are point-in-time and not likely to be very accurate. whereas Energy figures are cumulative.

The power values are averaged over 5 minutes so should be equivalent to measuring energy. I could use cumulative but I would still have the same problem needing to removed the energy I don’t export because it charges the battery and vice versa.

Try the Net calculation setting under the parameter config. However the existing v7/v8 charge/discharge upload would need to be merged into one parameter, positive = charge, negative = discharge 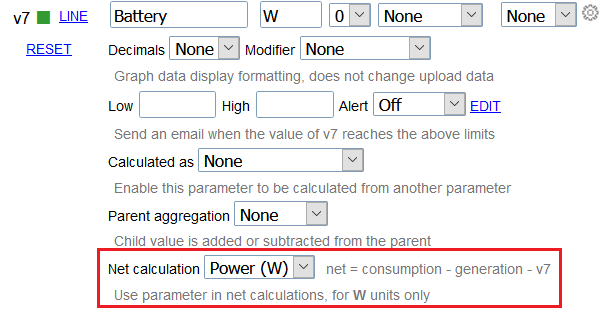 Thanks for the response. I updated v7 to be net movement and added net calculation but it still records consumption - generation without taking into account v7. I tried uploading the net only import and export values and the value changes as expected. 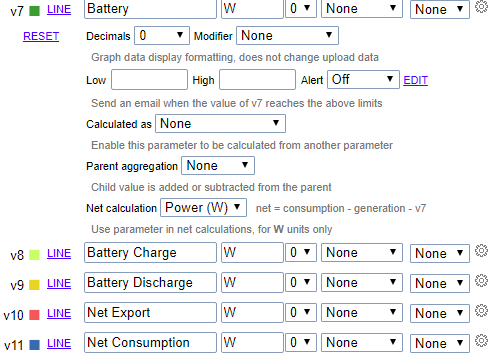 v8 to v11 have net turned off so they are not part of the calculation.

I have done a bit more investigating with the calculations. The net calculation works in DAY view only. I checked this by uploading the net data only and the values are consistent. When in live (or single day) the value ignores the Battery adjustment.

Maybe this is intentional?

Maybe this is intentional?

Currently the Extended Parameter Net Calculation setting will only be accounted for in daily, monthly, yearly TOU and CR/DR balances.

The live view does not show how incorporating the additional parameter affects net data. This may be added in the future as an overlay on the live net view etc.

Thanks. I think that a live net view would be a good addition to the information on the live page. Maybe when you mouse over the net $ the pop up could show gross and net values. This would give an instant value to the battery for the day.

I am still trying to get the battery energy flows correctly recorded. It is currently overstating the export by the value the battery charging. Any thoughts on how to achieve this?
thanks David

ah perhaps on of these links may help