I am getting readings via PVOutput which are way out of whack with my Elster A1100 readings.
Mr Smappee reckons his monitor is correct, but I have my doubts, as it quite often shows a negative load on one phase!!??
The “Help” pages list three possible options for 'direction: Solar, Consumption or Both. Mine is set to ‘Both’, and PVO is providing results showing net power figures.
I now notice that, on my ‘settings’ page, there is a fourth option for ‘direction’ - net.
What setting should I be using?
Thanks in advance.

Using Both treats the consumption readings as gross.

Thanks for the reply, but now I am totally confused!
My setup page shows only one device, not a primary and a secondary.
As far as I can recall, my ‘device’ was set to ‘both’ when I installed the Smappee in December 2015.
At that time I compared the PVO readings, which you received via the Smappee, with the authority’s meter over a three week period The difference was around 1%.
The system is still set to “Both”, and PVO is giving me import/export figures.
The error between the meter and the PVO readings from 1845 on 14/2 until 1645 on 19/2 were:
Meter imp: 73kWh; PVO/Smappee: 69kWh. Meter exp: 121kWh; PVO/Smappee: 101.5kWh.
I just now looked at the downloadable figures from the Smappee website, and for the same period, the PVOutput figures for total power usage and total solar output were basically identical, except for a few differences in the second or third decimal place.
BUT yet, the calculated import/export figures are in error.
I am, of course, making the, possibly rash, assumption that the meter is correct!
To further muddy the waters, on Feb 20, PVO reports a total consumption of 35.440kWh, but the Smappee website records a definitely more believable figure of 16.617kWh. The generation numbers are identical!
I would have expected an import of around no more than 10kWh that day, definitely not 14.
From 1645 on 19/2 until 1215 today, the meter import was 17kWh; PVO/Smappee: 23.192kWh. Meter export was 20kWh; PVO/Smappee: 6.362kWh. These numbers are truly weird.
Possibly there is more than one problem, but I would appreciate if you could look at my setup, and either correct any errors or tell me how to do it, so I can eliminate a setup problem from the mix. Then I can proceed with the possible Smappee problem. My system ID is 41647.
Thanks again in advance.

PVOutput takes the values from smappee API service without any modification unless a rule is used. The data on the 20/02 looks like consumption is reported as generation. 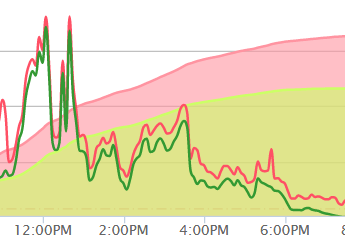 Thanks,
So, I can take it that my settings are correct?

So, I can take it that my settings are correct?

as it quite often shows a negative load on one phase!!??

Well another possibility is that you have the smappee measurement leads connected on the wrong phases - that certainly gives negative/weird results.

Sorry to groan loudly, but I know the setup is correct.
If that is the problem, why are the readings swapping between + and - randomly?
I have been having a running dialogue with the Smappee support people since early October last year.
The setup had worked perfectly since December 2015, then started to give erratic readings. Some times I can sit and watch the readings change between positive and negative, then the readings will seem sensible for a few days. I say ‘seem sensible’, because though the readings look reasonable, when compared with the meter they are not within 30%!
So, no, my installation is correct. It was within 1% of the meter readings over the first few months, and has not been changed. Also I have checked the clamps etc. several times at the request of the Smappee mob, complete with sending them detailed photos of the installation, and they agree it is correct.

I have the same issue. Their support isn’t very helpfully.

I think if Smappee device suddenly sees export (-) on all 3 phases it assumes the user installed them incorrectly and reports them as import (+). I can see on my digital meterbox that the kWh it reports is correct but the direction is not always correct.

Did you solve your issue?

Short answer - no!
Longer version - I had to put this on the back burner because I went into hospital for a knee replacement, so couldn’t really keep up the dialogue with Belgium, nor could I get to the the board to check whatever.
In the meantime, I’ve had a smart meter fitted, and today I’m going to check how the Smappee compares with the new meter’s figures.
I have noticed, though, that there is still a negative power consumption showing on the same phase as before. .
At least the Smappee guy said he would not close the request before I get back to him. I checked just now, and it’s still open.
I can but live in hope!

All three phase. 7 kW of panels which just about cover the ducted aircond between 11 and 4 or 5 in summer.
The delay is because I went and got a new knee.

In order for you to use Smaapee to monitor all three phases for PV power production, Power consumption and Net power you will need to have six CTs…three for consumption and three for PV power production or generation. They must be paired accurately on each phase because they must feed into the same port on the Smaapee. Each pair will consist of one CT on the same phase for the Grid input line and the PV input line. The Smaapee will provide the detection of the power values for Generation, Consumption and Net power. The table shows how the readings are combine to get the desired values of Net, Generation and Consumption:

These combination of the CT outputs are + for Grid and - for solar assuming that your Solar input is at the bottom of your electrical panel causing the solar to be distributed to the house circuits first then the excess is fed to the grid. I assume that the Smaapee assumes the voltage is constant and equal for all three phases since the instructions do not include making a connection to sense voltage.
Find the IP address for the Smappee and type it into your browser. It will probably be of the form 192.168.0.xxx where the x’s are assigned by you home network. (The address should be found in your router’s web page which can be accessed through you browser at the IP address: 192.168.0.1.) If the Smappee has a web page it should appear in your browser. If that is the case you can access all the readouts available on the page using an API. Check out this link:

Expert Mode, Login into the Web portal of the Smappee monitor; find the URL to your Smappee, using your APP.   In your Smappee App, navigate to "Main menu > Smappee" and you'll get t...

If you only have three sensors on the mains only you will need to combine your Smappee output with your Solar monitor values to determine the Net power but you will not be able to determine the consumption or the solar production of the individual phases.

Hi,
I have used the Smappee monitor page since the Smappee was installed in 2015.
The ‘system’ has been functioning perfectly since its installation (<1% error over the distributor’s meter) until about October last year. My problem is that the readings have gone haywire with no changes in the installation. Smappee is saying it’s an installation fault, and can’t give me a reasonable answer as to how it was good then changed. The duel continues. 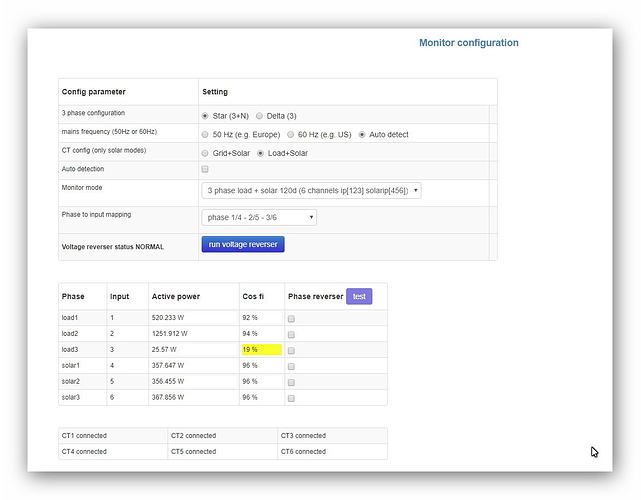 It looks like your six CT’s are measuring Consumption with CT’s 1,2&3 and Solar Production or Generation with CT’s 4,5&6. Your total Consumption is the sum of CT’s 1, 2 and 3 and your Generation is the sum of CT’s 4, 5 and 6. If this is the case you need to know your NET from your meter to complete the measurements. There is two possibilities for the Loads designation and it depends where the CT’s 4, 5 and 6 are placed. If they are placed on before the breakers which are the loads they are measuring NET and if they are placed on conductors which go to and from the house loads they measure consumption.

If the CT’s are placed:

Case 1: before the meter or between the meter and the power busses in the main panel you are measuring NET power which is + or - for Import or Export respectively.

Case 2: between the main panel busses and the house’s loads you are measuring Consumption

Case 3: between the AC output of the inverter and the busses in the main panel you are measuring Solar power.

The term “Loads” suggests that the setup assumes the Consumption is being measured and not the NET.

WARNING: I purchased a SMAPPEE to measure my consumption it lasted only two years and three months, learned a lesson today, there is no Consumer Guarantee with this product in Australia, Two Years is all you get. Buyer Beware. No offer of replacement, only offer, I could pay to repair it

Just out of curiosity, is yours the older type with CT clamps, or the newer one they want to install?