Would it be possible to change the weather condition calculation to use isolation data as well as estimates? I use the estimates method at the moment but find that I am having to amend the weather condition down on most days. If I set a realistic estimate for the month, (say 300 kWh for a summer month, 10 kWh per day), then on a fine day I would expect to generate over 12 kWh.

If using isolation data isn’t possible then could the percentage of estimated generation be configurable for each system? So currently it is set as:

Its a bit tricky but will be considered if it doesn’t cause too much performance issues.

Because I have East & West facing panels I am finding that the ‘weather condition’ is almost always wrong because (I think) my efficiency is low. So I’m guessing that this would help my situation as well.

I too, have run into this situation. I tried using estimates from NREL site, but this already takes weather into consideration when calculating an estimated system output. I have enough historical data and have used that to set estimates based on the BEST generation day in the month, multiplied by the number of days in the month. I just changed estimates, but for today at least the percentage method was accurate, However, being able to use isolation to calculate the estimate would be better and give a more accurate picture of conditions.

Hi, I was just wondering if this idea is still being considered?

I was just wondering if this idea is still being considered?

It is still under consideration but of low priority. 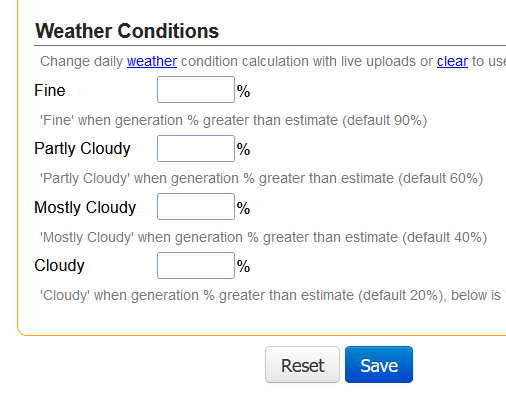 For the above enter -

Thanks for implementing this.

Hi, I’m not sure if this is working correctly. For example system Sunny Idle 2.25 on 11 November:

Looks like the generation stopped early in the day at 3:25PM, there are adjustments made to ratio for results before 5:00PM that will increase the ratio.

This adjustment will be removed in a future update, for systems that have custom ratios defined.

This adjustment will be removed in a future update, for systems that have custom ratios defined.

The change has been made to stop adjustments from 3:00PM.