As I understand it, the TOU columns in the TOU View currently show only imported energy for each TOU period. My local utility bills me (or credits me) based on net energy import over the whole TOU period thus the way PVOutput currently shows TOU Import doesn’t mean anything to me.

I would like to suggest for a future enhancement that columns be added to the TOU View that summarize the net energy imported (or exported as a negative number) for each TOU period. I do this in a spreadsheet now by using the GetStatus API call and a custom script to add up the net energy for each TOU Period. It would be nice to see it live on PVOutput.

If the import tariff model selected is Net then the TOU periods currently shown are net values, which already take into account generation.

When generation is greater than consumption (exporting) the amount attributed to the TOU period is 0.

What the TOU page doesn’t show is the export amount for each TOU period.

That is what I understood, although you’ve expressed it much more clearly. My suggestion is more along the lines of your last sentence. I’m looking to see the Net Import and Net Export for each TOU Period. In my personal spreadsheet, Net Import=gross consumption - gross generation so that positive values represent a net import from the utility and negative values represent a net export to the utility for the TOU Period.

Like I said, this is just a suggestion that would be of benefit to me. If there aren’t many others that would find this useful as well, that’s OK as I’ve found ways to get the data I want.

Its a good suggestion, although the table data on the TOU page is quiet wide already.

pjschaffer,
I would like to see your script so I could implement production value into a spreadsheet.
I want to understand my return on investment. My time of use rate has almost a 4 to 1 range and four different rates. I am much more interested in money than energy. I am new here; I did not know there was a GetStatus API. I need to learn how to use it.
Just wondering if I can live long enough to break even.

I don’t have any problem sharing my script. The script is written in Perl. It does require that both Generation data and Consumption data have already been uploaded to PVOutput. It then uses the GetStatus API to request all the Live Data for the day which it then parses, breaking it up into three different TOU periods for both Generation and Consumption. The spreadsheet I import the data to then calculates the Net for each period as Consumption-Generation. Negative Net represents a net export for a period.

The script uses to data files. The first is an optional file that stores various parameters such as System ID, API Key and proxy data. The second file contains a set of rules that define the holidays my utility observes as they don’t have a Peak period on weekends and holidays.

I generally call the script from inside an Excel spreadsheet using VBA. Unfortunately the spreadsheet itself is extremely highly customized for my specific use and, of course, is very sparse on documentation.

If you would like to see the script I use to parse the TOU data, you can send me a message through PVOutput with your e-mail address. My system is Schaffer.

The recording of ‘Time of Export’ data commenced on Aug 16th and is now available for viewing on the Daily, Weekly, Monthly and Year views.

Click on Customise and choose either the Time of Export or Time of Use vs Export view. 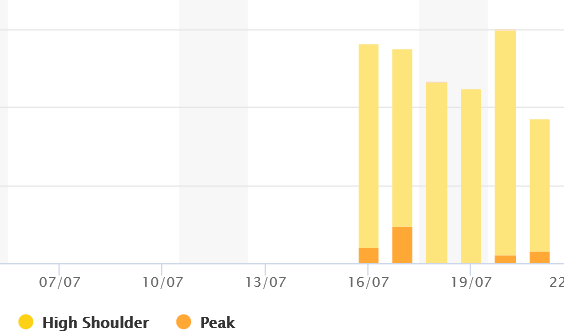 Time of Use vs Export

Its possible to use the Recalculate functionality to capture Time of Export data prior to Aug 16th.