It would be useful to quickly compare the current period against: the previous period, same period last year, 30d average.

The reason is I want to know in the morning what I could expect for output. But also quickly compare if daily performance was better or worse than previous periods from the ‘daily’ or ‘live’ view.

For example: if looking at a day - I would like to quickly compare against yesterday, the same day last year and 30 day average.

This data and functionality exists already (in part) but is clunky to get to. Adding to the menu or providing a line item under the chart may be useful.

It could simply be the numbers but ideally a chart overlay.

Maybe some other users can suggest their preferences.

I see ’ X days’ already exists within the ‘compare’ box. A user can currently use this functionality to do a day-by-day comparison of another period.

So maybe these could be considered:

There are probably a few more permutations.

Yes, I had a similar idea: Easier comparing last 2 days and to best day

Still keen for this.

The record date compare shortcut as been added.

The following dates will be retrieved for comparing - 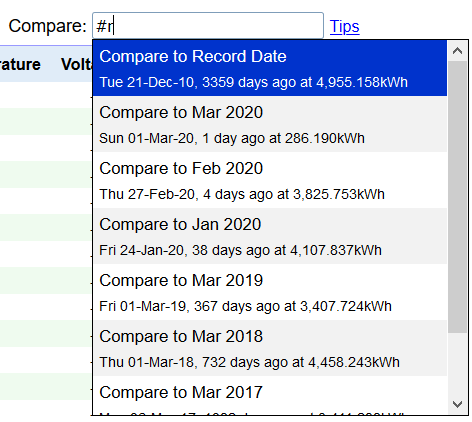 This currently works only for your own systems so you’ll need to be logged in to see an updated list.

1 Like
Easier comparing last 2 days and to best day